Birds of a Feather?

I have never been able to “commune with nature” much throughout most of my life. I’ve mostly lived in either urban areas, or in neighborhoods where “a nature walk” meant looking at the potted plants on the neighbors’ decks and being sniffed by the occasional dog who had wiggled under his backyard fence so he could roam the sidewalks for a while.

A year ago, we moved to a small city in northwestern Georgia, in the foothills of the Appalachians. Our neighborhood is a subdivision built in the 1940s, back when they didn’t bulldoze all the trees and hillocks and create a flatland to fill with row houses. There are rolling lawns, oak trees towering everywhere, many large flowering trees, and a real lake just two blocks away. The lake has a one mile paved walking trail around it, and is populated by a nice variety of waterfowl, along with fish, lots of turtles, and the occasional muskrat. So for over a year now, I’ve been able to take real nature walks, and see actual wild animals. Well, actually the animals are all pretty tame, but they aren’t domesticated.

When I first started taking walks around the lake in late 2009, I was particularly fascinated by the large flocks of funny little dark waterbirds with fat round bodies and white beaks. 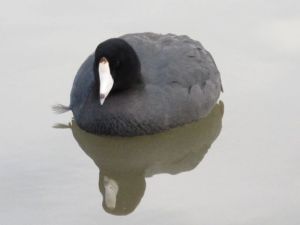 I had to look them up on the Internet since I’d never seen anything like them before. Turns out they are “coots.” Until you get real close, you can’t see their tiny dark eyes on either side of their strange long white beak, so they have this weird “Cyclops” look to them!  I had heard of men called “funny old coots,” but I never knew where the name came from!

There are plenty of mallards, which I recognized right away, and a substantial flock of Canadian geese who not only winter here, but seem to stay year around rather than migrate back up to the frigid north.

There is also a sprinkling of several other kinds and colors of ducks, including a few white ones that look like the standard barnyard ducks.

And then there’s this one, who showed up

just last week out of nowhere all by itself. I’ve been unable to find anyone yet who can tell me what breed it is.

And on occasion, we are treated to the presence of this much, much bigger guy. 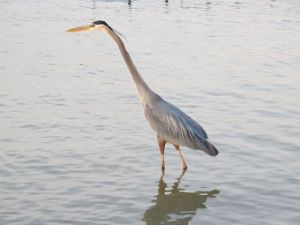 But there are two water birds that seem to puzzle many people new to the lake walk. It’s pretty obvious that each is some distinctive breed of goose, since they are way too big for ducks and have much pointier beaks than a duck has. But most people admit both are like nothing they’ve ever seen before.

Only those of us who have been keeping up with the Circle of Life on this lake for a year know what they are. And therein lies a story.

When I first arrived at the lake to check it out in fall 2009, in among the waterfowl was one lone white barnyard goose. Since there are no barnyards anywhere for miles around, it wasn’t clear how she got mixed in with the coots, mallards, other ducks, and Canadian geese. How do I know she is a she? Because one day in April 2010, she showed up with six little goslings. She wasn’t the only new mama. Several pairs of Canadian geese were also herding around little flocks of their own, and a number of mallard females also had anywhere from 6 to 12 little ducklings in tow.

No, she wasn’t the only mama, but she was the most fiercely protective one. As the weeks went by, many of the other mamas seemed to take less and less interest in their little ones, even far earlier than it was evident the little ones could care for themselves. And thus the numbers of growing duck babies, as well as Canadian goslings, dwindled. Perhaps they were picked off by neighborhood cats, or the occasional coyote rumored to be in the area.

Mother Goose, however, never let her little ones out of her sight for a moment. Until they could swim, she regularly herded them around back yards that butted up next to the lake walkway, helping them look for items to munch.  She gathered them all up carefully under her wings when they were very small to take naps–and take refuge from rainstorms. And if anyone ventured anywhere near them, she would dash forward and hiss and squawk and threaten.

We wondered just where she had found a daddy barnyard goose in order to give birth to her little flock. But as the weeks went by, we wondered no more. All the babies started out a sort of fuzzy tan color. But within a very few weeks, the beaks and feathers on three of them began darkening, while the beaks and feathers on the three others remained light. By ten weeks, it became very obvious just where she had found their daddy. 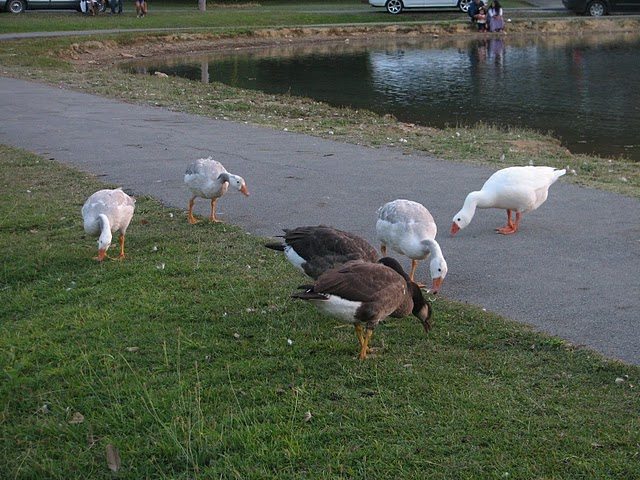 They were almost full grown in early July, and it was clear that the light colored ones were never going to be bright white like their mama. They were various shades of silvery gray. And the dark ones obviously took after Daddy—who had obviously been a love-em-and-leave-em Canadian goose.  Their coloring looked quite a bit like a Canadian, but the white markings on their faces were much more spread out than the pure bred Canadians, and their necks only darkened to a chocolate brown instead of a black . And their beaks, although darker than Mother Goose’s, were more like the shape of hers than of the father.

The Canadians on the lake who had mated with Canadian females bonded with them, and shared parenting duties. They would swim around the lake in family groups, with one parent leading the way, the goslings strung out in a row, and the other parent bringing up the rear. Not so with Mother Goose. She was doing a Single Parenting job, and doing it very successfully.

Sadly, one of the almost full-grown dark goslings was killed by a car as it attempted to cross the road from the lake to a backyard in summer 2010. But the rest have all survived. And throughout fall and winter 2010/2011 the family stayed together, not hanging out with the other geese on the lake at all. I did notice, though, that as soon as they got big enough that the color differences became obvious, each gosling seemed to naturally have more of an affinity for the others its own color. If all were taking a nap in a yard, the light ones would be sleeping in a huddle, the dark ones some distance away in their own huddle. Mama, however, fussed equally over all of them.

For a couple of months in January and February this year, most of the waterfowl on the lake disappeared. I’m not sure where they go in the short Georgia winter. But a few weeks ago they were back. Including Mother Goose and her quintuplets. At first they kept to themselves just as they had last year. But within a couple of weeks, I started spotting one or more of the quints hanging out with a flock of Canadian geese grazing in nearby yards. Now that spring is officially here, mating season has obviously begun, and Mother Goose is down to just two of her offspring hanging out with her, one of each color.

Most of the Canadians  have disappeared just as they did for a short time last spring at nesting time, along with the three mixed-breed geese. It will be fascinating to see if some of Mother Goose’s Family show back up with new goslings of their own—and to see what coloration they develop.

Yes, the average person seeing Mother Goose’s last two resident offspring side by side for the first time would never guess they were siblings.

And it seems to me that there is a cautionary tale for Christians in the little microcosm of a fowl society that floats on my lake. Especially in the lesson of Mother Goose’s little flock.

When the ducklings started out in life, they were all tiny, tan, fuzzy, and vulnerable. When danger threatened, they were happy to indiscriminately cuddle together as siblings under Mother Goose’s wing. But as they got older and bigger, they began taking on superficial differences which eventually pushed them away from one another. They still recognized Mother as Mother, even though she looked different from themselves. But eventually they recognized as siblings only those who looked the most like themselves.

And so it is with most Christians. We start out our Christian walk the spiritual equivalent of tiny, tan, fuzzy, and aware of our own vulnerability. We define ourselves as sinners in need of a Savior, and turn in repentance to our Father, grateful that He so loved us that He sent His Son to save us. We want to please Him and follow Him in every aspect of life, as we grow to understand His will. Our Brothers and Sisters in Christ are those who are going through this same process of being born again, becoming part of His family. When danger lurks, we flock together with those of like mind and heart under His Wings.

But as time passes, we become much bigger in our own eyes, and we take on superficial characteristics that serve to separate us from others in our own eyes. These differences may be special customs we observe, denominational dogmas we gradually acquire as absolutely “necessary for salvation,” idiosyncratic interpretations of obscure Bible passages that we insist must be embraced by any “true Christian.”

This puts me in mind of a piece of CCMail humor that made the rounds a while back. There have been lots of variations of the details, but all go something like this:

It would be hilariously funny… if it wasn’t so close to home for so many Christians!

I think it would be good for all Christians to remember this slight paraphrase of something very important Jesus said:

Verily I say unto you, Except ye be converted, and become as little ducklings, ye shall not enter into the kingdom of heaven.

This entry was posted in Uncategorized and tagged Pam Dewey. Bookmark the permalink.

2 Responses to Birds of a Feather?